5 Ways Flutter is Setting the Trend in Mobile App Development 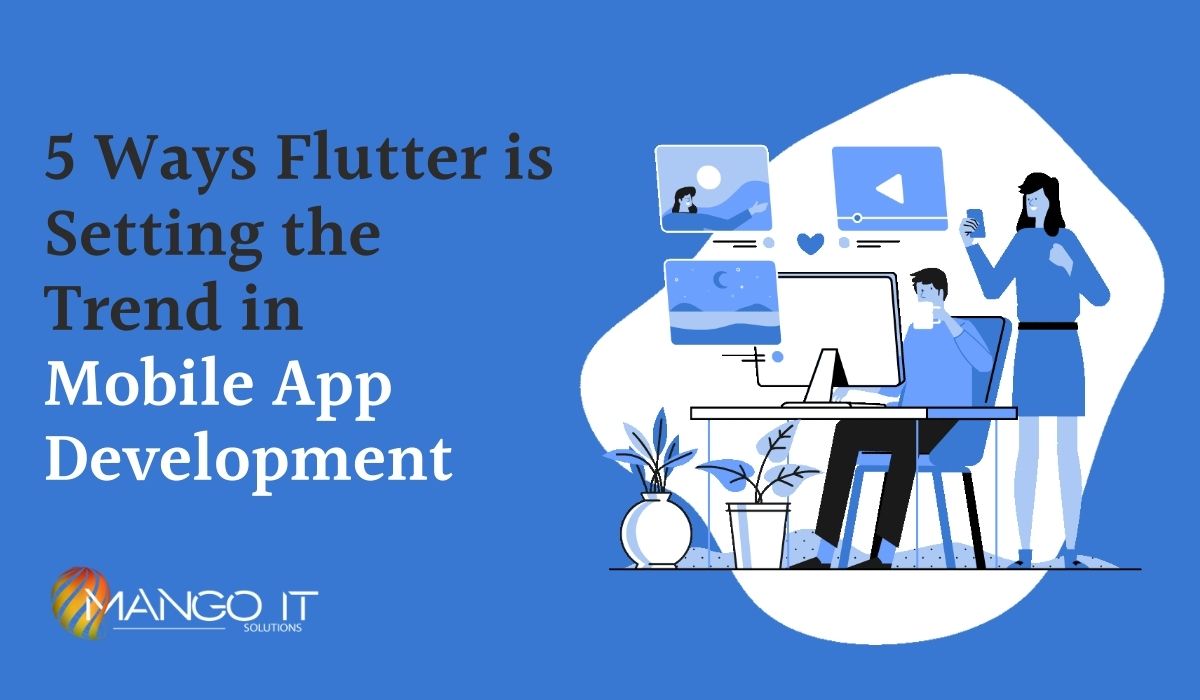 Google’s UI Kit, Flutter has turned the game around in the world of app development. The speed at which flutter app development is becoming mainstream in the tech industry is simply unimaginable. It furnishes companies with immense possibilities that work across diverse platforms due to its quick turnaround time. And with the “hot reload” feature of Flutter, in particular, developers can develop and test an app faster.

Let’s look at the five top reasons why Flutter will rule in 2022.

Despite being the newest member of the mobile app development community, Flutter is quickly leaving behind other frameworks and providing better opportunities to build a feature-rich business mobile app.

The ‘write once’ feature is what makes flutter app development beat the heat of the competition. It eradicates all the limitations that developers face while writing a range of codes for traditional diverse platforms. In simple words, developers who use Flutter only have to code once for the apps to work on both iOS and Android platforms. This is one of the major reasons why a lot of developers across the globe prefer using it to speed up the application development process. From a user’s perspective, flutter improves the quality, design, and speed of the application.

The overall flutter app development process is really efficient. Since the developers only need to code once for both Android and iOS versions, it eases and accelerates the process, making it simpler and more efficient. This approach further allows a developer to reuse it with different plugins, thus cutting short the development time. And as far as testing is concerned, a simple quality assurance process is enough to verify the functionality, features, and programs of a cross-platform mobile app.

Hot reloading is possibly the most unique feature that allows developers to keep a track of all the changes made within seconds. It is one of the main reasons why flutter app development is so popular amongst cross-platform developers. As developers code, they can view the progress they have made so far, which ultimately boosts the productivity levels of the developers. This feature comes in handy in case of making bug fixes.

Flutter is simply perfect for MVP development as developers only need to code once for an app to work on multiple operating systems. Thus the overall development cost is a lot less compared to native app development. Furthermore, due to flutter’s compatibility with Firebase, building different backends for MVP is not required and the apps are faster to market.

Widgets are crucial for any app interface. Flutter integrated apps offer a range of widgets such as fonts, navigation, etc., that can be tailored as per the requirements. There is no denying the fact that Flutter mobile apps provide a very smooth UI experience compared to another cross-platform framework.

One of the major reasons behind the growing popularity of flutter app development is that it helps in future business scenarios and bridges the gap between the tech world and businesses. So for all your mobile app startup needs, Flutter is the perfect option to go with. Flutter is not just another venture by Google but is a platform that is quickly taking over other frameworks and empowering global brands and leaders with the best cross-platform mobile applications. With a robust Google-backed Firebase, wide customizable widgets, pre-designed tools, Flutter outshines other languages and proves to be an efficient, robust and effective solution for the mobile app development for startups and even for large organizations.