6 ADVANTAGES TO USE NODE JS FOR YOUR PROJECT

The consensus on the benefits and drawbacks of Node.js is rather unambiguous. Programmers adore using it. And it’s clear why. Node.js, a backend run-time environment, enables programmers to load up mobile apps with multiple concurrently executing functions without risking server failure or slowdown. Additionally, it utilizes JavaScript, one of the most widely used and user-friendly programming languages in the world. Read this blog to find out more about Node.js and the top advantages to use Node.Js for your project. 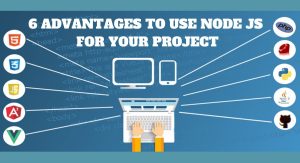 A highly well-liked runtime environment called Node.js is built using JavaScript V8 code from Chrome. In the year 2019, Ryan Dahl made the announcement. It is an open-source platform that gives programmers the ability to make instantaneous online applications. Node.js has rapidly gained popularity due to its capabilities and non-blocking asynchronous architecture. The advantages of Node.js are being utilized by giants like Uber, Netflix, Walmart, and eBay for their web applications.

Top Advantages of Use Node.Js

Here are the top 6 advantages to use Node.Js for your next development project.

Developers find it simple to scale the program both vertically and horizontally when using Node.js for web application development. Web developers can expand the network of nodes by adding additional nodes while growing the program horizontally. On the other hand, programmers must provide more resources that can be added to the current system in order to accomplish vertical scalability.

Due to the event mechanism used by the technology, the server can respond non-blocking and with excellent scalability. Applications written in Node.js don’t need a significant amount of core development time. It can function with a number of modules and microservices that are each executed in their own process. As a result, it has a higher degree of scalability than other JavaScript servers.

Node.js is well known for its high performance and ability to handle large volumes of data processing at once. It is the ideal option for backend development because it uses Google’s V8 JavaScript engine to comprehend the JavaScript code. Writing and implementing server-side code is made simpler and faster by the direct compilation of code into machine code provided by the Node.js web app development engine.

The Node.js runtime environment provides non-blocking I/O operations and speeds up code execution on the backend. Since it is a single-threaded event loop, the callback function is delegated to the event loop but run by distinct threads. It also uses many worker threads to execute the asynchronous programming code in the background.

V8 engines, which were initially created for Chrome, are the greatest engines currently available, as we all know. However, the Node.js development team modified it for the purpose of the javascript runtime environment. For remarkable speed and performance, it is written in C++ to compile JavaScript functions into machine code. V8 exhibits performance improvements each year and reaps the benefits thanks to Google’s significant time and effort invested in its engine.

It is not fiction that Node.js is the fastest cross-platform scripting language and event-driven architecture, offering exceptional app performance. Node.js is implemented using the V8 engine, which was first created for the Chrome browser. Based on Chrome’s V8 JavaScript engine, Node.js is a browser-specific JavaScript runtime environment. It uses a callback function to handle HTTP requests and a non-blocking I/O architecture to maximize performance while minimizing memory usage.

In 2015, the Node.Js foundation was established. It was created to manage the Node.Js project’s development and production. Industry titans like IBM and Microsoft employ some of its members as leaders.

There are currently thousands of contributors to the Node.Js community. More than 300 new businesses and established enterprises use Node.Js. Node.Js becomes a time-proof tool as a result, which cannot be disregarded.

Only the most practical use cases showcasing Node.Js’ advantages will be taken into consideration because mentioning all of that here is quite tough.

Using a runtime environment and Node.js, developers may create the front end and back end of web applications. It gives programmers the opportunity to use JavaScript to create code for server-side applications.

Other server-side programming languages are not required. JavaScript support in almost all browsers makes it easier for developers to launch applications.

Because developers view Node.js’ asynchronous nature as both an advantage and a hindrance, it is a popular backend development platform. The code automatically sends a callback each time a function runs. The phenomenon known as “callback hell” occurs as the number of functions also rises.

Node.js’s control flow features provide a solution. You can organize callbacks and map functions with the aid of a web app framework. Similar operations are automatically integrated, and it locates relevant features through a search or in a folder.

Node.js offers far more benefits than drawbacks and this is due to its features, architecture, and supportive community. Because of this, programmers like to use Node.js in as many projects as possible that fit within its capabilities. Additionally, Node.js may be used for both frontend and backend servers because it supports JavaScript, which is a major bonus. So, the ideal technology to choose if you want to advance your client’s project is Node.js.