Advantages of Python For Creating a High-Level Applications

Numerous programming languages are employed globally for creating high-level applications. Each has unique characteristics as well as advantages and disadvantages. Python is currently one of the most popular programming languages. Python allows you to focus on the primary features of the app by taking into consideration typical programming duties because it is a high-level language. There are a number of justifications for using Python when creating operating system shells, web browser pages, and software applications. 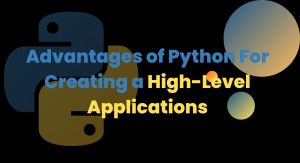 The Python programming language’s simple syntax rules make it incredibly simple to keep the code database readable and the app maintainable. Let’s understand a little more about the Python language and how developers and other businesses are using it for creating high-level applications.

Python is a programming language that developers favor for a reason. It has certain distinctive features that make programming a lot simpler. Let’s look at several characteristics that make using Python for creating high-level applications advantageous:

Python is a Simple Language to Use and Read

Any application’s effectiveness heavily depends on the quality of its source code. A powerful programming language that is easier to read, update, and maintain is necessary for a robust app.

Python incorporates each of these traits. It has everything, including a sizable collection of tools and libraries that are essential for creating outstanding frameworks and programs.

Python contains a database of well-organized and clean code, making it easier for Python developers to do software maintenance tasks. It spares developers’ important time and effort by not requiring them to write additional code.

Python’s syntax guidelines emphasize the readability of the code by mostly using English keywords. When creating high-level applications, readability is the key factor. As soon as the program is used in real-world situations, customers’ needs may alter.

Speaking of enhancing functionality, one of the biggest advantages of using Python as your primary programming language (or even as a secondary or tertiary language) is the abundance of libraries you may use in your work. A library is essentially a chunk of reusable code that may be used for standard tasks like image manipulation, problem-solving, database management, regular expressions, and so forth.

Libraries aid in lowering coding errors, increasing programmers’ productivity, and reducing the size of software (and lines of code). Coders can simply call a library – frequently with just one line of code – to do a task instead of creating many lines of code to do it.

Please take note that when we use the word “library” in this context, we also mean modules and packages.

Python is a popular scripting language for creating high-level applications because of its strong integration with Java, C, and C++. It may be incredibly helpful for altering huge apps and creating robust extensions for them because it was designed to be embeddable from the start.

Python is a popular choice among QA automation professionals because of its simple learning curve, clean syntax, readability, and vibrant community. Additionally, it features a unit testing framework that is simple to use. For instance, you can use it to carry out geolocation testing for mobile devices.

In addition to quick code adaptation, the Python community offers users quick and helpful support for creating high-level applications. Python is sometimes referred to as a “ready-to-run language” by professionals because it simply needs straightforward code to be performed. Python makes improving and testing programs easier.

Python was created with the intention of assisting programmers in creating clear and logical code for both big- and small-scale projects.

The fact that Python supports many programming paradigms is a key characteristic that makes it appropriate for large and complicated projects.

The following programming paradigms are supported by it:

Python declares that there are no licensing payments necessary to use it because it is an open-source programming language. Python is becoming the most practical and cheap option for many businesses as a result of this. It offers complete web development tools, libraries, and open-source frameworks that significantly cut down on development time and expense.

Python does not have research contention, deadlocks, or other similar complex issues, therefore writing and maintaining asynchronous programming does not need much time or effort. This code’s different activation from each unit enables you to handle a variety of issues and circumstances more quickly when creating high-level applications.

The open-source license of the Python programming language. This facilitates easy user accessibility and permits unlimited modification and redistribution. This programming language can be used liberally by developers, which will aid in its advancement