The rise of programming languages such as Python, Ruby on Rails, Laravel, etc. in the last few years have overshadowed Java to some extent. But there are a lot of developers who still prefer Java for web development. And as a matter of fact, a lot of tech giants use Java including the likes of LinkedIn, Google, Netflix, eBay, Amazon, Intel are just a few names on that list. 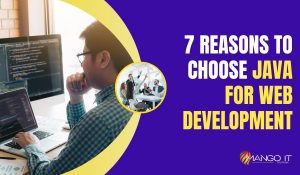 Why should you choose Java for web development?

So, here’s everything that depicts that Java is one of the best programming languages ever created. The reasons why Java is a top-notch choice for your next web development adventure.

While this seems to be a beginner kind of a reason to mention, platform independence adds a lot to Java’s popularity. Enabling developers to write once and reuse the code anywhere makes the development process a little more streamlined. This is an important feature of Java which makes it highly portable and thus it can be used in multi-platform applications easily. So, businesses don’t need to worry about changing operating systems. Also, the hassle and cost of resolving the incompatibility of existing software written in Java are eradicated.

Java has a rich set of APIs

Another key reason that makes Java perfect for web development even today is it’s rich set of APIs. Java comparatively has a far richer and far more robust ecosystem of libraries and tools. It has APIs for networking, I/O, XML parsing, database connection, utilities and almost everything that you can’t even think about.

A lot of developers around the world use Java for web development because they find Java to be highly secure. Java is loaded with many inbuilt security features like advanced authentication, cryptography and access control which makes it a choice of language for web development. Java provides developers with comprehensive APIs including secure login mechanisms, digital signatures, ciphers, creating custom security policy and much more.

Java provides a multithreading feature for its developers allowing them to manage multiple users or threads at the same time. Hence the hassle of executing multiple copies of the code on the same hardware is eradicated in Java. This further adds up to the speed of your website. Java’s multithreaded environment furnishes a user with faster response time, less issues, multiple operations, better performance, and faster concurrent access.

One of the major reasons why large enterprises across the globe choose Java as their preferred language is its ease in scalability. Solutions built using Java can handle increased load of work easily. Whether it be higher request rates or the larger data sets, Java provides the developer the capability to scale itself both vertically and horizontally as per the new requirements.

The whole essence of choosing Java for web development lies in its excellent tools and IDEs available for free in the market. It enhances the overall productivity. NetBeans and Eclipse are the two most popular IDEs to develop Java applications. However there are many other open-source tools and plugins available.

Last but not the least, this is one of the major reasons contributing to making Java a top-class language for web development. Java comes up with a huge yet interactive community of developers. The community members help, support and share knowledge with each other. Java promotes the trend of taking and giving back to the community. There are so many open source Java developers who contribute a lot to the community as a developer or as a tester.

For all the noise around the latest trending web development languages, Java still has a strong foothold in the industry. All the features that we’ve mentioned and much more to it makes Java for web development a perfect match. No matter how many new programming languages may come into being, Java will always rule the realm of web development.