Vue Vs React 2022: Which Frontend Framework You Should Choose and Why?

Vue.js and React.js are two of the most popular front-end frameworks among developers. Each year, they switch places on the podium for “most loved, used, or popular.” Although both technologies provide developers with a practical method for creating various Web applications, each has its own optimal use cases and caters to various business requirements. This article will walk you through the detailed comparison of Vue vs React. 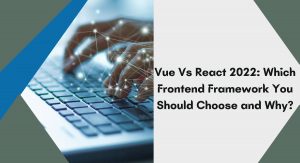 In order to improve upon the JavaScript tools at the time, one developer, Evan You, created and released Vue.js in 2014. An ex-employee of Google, he set out to develop a framework that merged the finest frontend development strategies from frameworks like Angular, Ember, and React with additional capabilities that made developing Web apps quicker, simpler, and more enjoyable. The Vue.js Core Team is now in charge of the framework’s development and upkeep.

React was developed by Facebook to address a variety of problems, and the company is still supporting it. React presently works under the MIT License, making it open source, however, there had previously been questions about its license.

The fact that a big company is supporting React corporately suggests stability in the future and suggests that React will continue to be developed with long-term support.

In the popularity contest between Vue and React, React prevails. It is not unexpected that Facebook has grown more popular and has a larger community given that it supports this technology. Evan You and the team are still promoting Vue even though it has a smaller community and fewer tools and modules.

React has a far better job outlook than Vue because it has been around since 2013 and is backed by the dominant social media company Facebook. On the other side, Vue.js is a new option whose popularity is still rising.

According to the findings of the 2022 Stack Overflow Survey, React is currently the sixth most favored web framework, with 68.19% of participants indicating they really enjoy using it. Despite maintaining its 18.82% share, Vue.js fell one spot from 2021 to the sixth position.

Your Vue.js application becomes slower and less obvious as you add more components. It becomes more difficult for the program to load more quickly as a result. Fortunately, this framework has a virtual DOM to increase application speed. One of Vue’s most important features is lazy loading. Faster load times are a result of it.

In contrast, a React application operates more quickly, has a better user experience, and has independent components that function well together.

The component-based architecture of React makes it possible to build single-page applications with greater sturdiness, while reusability reduces code complexity and does away with DOM interaction to speed up page loading.

Additionally, the library modifies the webpage as needed without necessitating a complete page reload. Instead of wasting time loading the website, it eventually refreshes the content.

Support for Vue vs. React components

Huge component libraries are provided by both React.js and Vue.js, allowing developers to create applications more quickly. The ability to reuse component code also increases developer productivity as they create user interfaces based on components.

Applications built using Vue vs. React can easily include third-party libraries. The majority of the React source libraries are improved iterations of already-existing parts. The built-in plugin system in Vue is used by many external libraries.

Vue was developed specifically for making multi-page interactive apps. You may easily apply the framework into your current apps by importing its library. Additionally, the Vue CLI has a ready-made scaffolding that enables you to launch a new project right away. Project dependencies are implemented as plugins when they are installed, thus even if some standards change, you only need to update the dependencies.

Regarding the companion libraries for state management and routing, they are officially supported and up-to-date in Vue because they are a component of the core library (unlike React, where they are community-based). It can be effectively utilized to create single-page applications, but if you choose to use HTML syntax rather than JSX, future template reuse may prove challenging.

React has a lot to offer due to its strong community. Although it works well with single-page apps as well, it is lightweight enough to construct multi-page apps with ease. Building scalable web apps is made much easier with React (look at Facebook). React, unlike Vue, does not come with pre-built routing solutions; instead, you must utilize third-party libraries (Flux/Redux, as well as the scaffolding tool create-react-app).

Comparing React’s CLI to Vue’s, it performs somewhat worse. You can only utilize a single-page app template during project generation; customization is not possible. Projects can also be generated from user-built presets starting in 2021.

Best use of React

The final decision to be made in 2022 will therefore be between React.JS and Vue.Js. But to be honest, it would be really challenging to come up with a good response because both of them are formidable opponents.