Maintaining project efficiency has become critical in the age of web app development. The longer you take to finish the assignment, the more expensive it will be for your company. Node.js for developing web apps is a breakthrough with unique characteristics. It is regarded by developers as one of the most efficient cross-platform JavaScript environments for developing robust and effective REST APIs, mobile apps, and web apps. 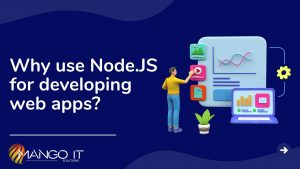 What exactly is Node.js?

Node.js is not a framework or a library, but rather a runtime environment based on Chrome’s V8 JavaScript engine for server-side execution of JavaScript code. A single-threaded event-based loop ensures non-blocking executions. Ryan Dahl was the first to introduce the technique in 2009.

Here are some facts to consider:

Businesses and many developers use Node.js for developing web apps because of its excellent JavaScript support and cool features. Node.js is used by 43 percent of Node.js developers for enterprise projects and 85 percent for web application development.

If your company requires a customized solution with a variety of innovative features, Node.js is a more cost-effective option than other options.

The Most Important Reasons to Use Node.js for developing Web Apps

You can easily share data with NPM (Node Package Manager). This is one of the main reasons why a web app development firm uses Node.js. It’s challenging to transfer information while concurrently using another framework. Organizations understand that this will expedite their operations.

This Node.js feature allows developers to easily share information while working on a similar project. Developers use Node.js to maintain code. NPM makes it simple for Node.js developers to publish their work.

The almost 50,000 bundles in the storehouse assist developers in making key decisions before starting a project. This allows them to easily refresh, share, and reuse the code.

One of the quickest programming platforms available in Node.js. It takes fewer lines of code as compared to Java.

Node.JS enables developers to write code in a single scripting language for both server-side and client-side applications. Web development projects can benefit from additional technology.

2018 Node.js User Survey Report shows that Node.js boosts organizational productivity. Only 4% of organizations, however, claim that it had no impact.

Organizations in the United States and Canada that have incorporated Node.js into their business strategy claim that it has increased developer productivity by 68 percent.

An active and expanding community readily supports Node.js. Due to its popularity, many web developers contribute to its improvement.

GitHub provides developers with a wealth of ready-to-use solutions and code. The community is always changing, and its members are working hard to give competent and dependable answers.

Many active Node.js fans and a big number of software developers from Microsoft, SAP, IBM, and other companies donate to the Node.js community on a regular basis to assist other developers.

Because Google’s V8 engines back it, JavaScript is quick. It compiles JS code into native devices and speeds up web development. This is why, in today’s world, every company is hiring more Node.js developers.

They are professionals at increasing the speed of a company’s web development projects. PayPal exemplifies this. In fact, after implementing Node.js, both PayPal and Netflix noticed the significant speed and cost savings. PayPal’s web development response time dropped 35%.

Using Node.js to create web apps does not require a large investment. According to research, firms that choose Node.js for web app development use less computational power to host them.

Node.js web app development does not require a large investment. According to surveys, companies that use Node.js web development require less computational power to host their websites.

Because Node.js is speedier than other development frameworks, it can save 56 percent on development costs.

The depth and simplicity of Node.js are entirely due to the node package management (NPM). NPM is the world’s largest software registry. There are over 1.3 million code packages in it. Best part is it’s free. As a result, developers have access to a large number of packages for creating high-quality, scalable applications. As previously said, Node.js is capable of handling several requests at once with ease. Managing your application’s traffic takes less time and money than rival software stacks. So, hope now you understand why you should use Node.JS for developing web apps.