Every company building a website should prioritize the user experience. All of the fantastic features and functions you’ve created must be available to your users. Your website must load quickly, be easy to navigate, and deliver a consistent user experience. 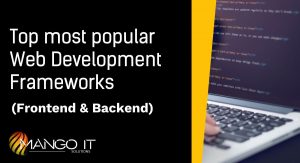 Unlike a few years ago, there is now a large demand for web application development, which has resulted in the development of various functional frameworks. These web development frameworks were created with modern business concerns in mind, and they provide a simple yet effective method to construct web apps.

Using frameworks that have been endorsed by thousands of developers all around the world is an excellent way to create rich and interactive web applications. Because a web program has a backend (server-side) and a frontend (client-side), we’ll talk about both backend and frontend web development frameworks today.

What is a web development framework?

React (or React JS) was developed by Meta (previously Facebook) in 2013, and it has achieved significant popularity in the web development industry since then. In actuality, React is an open-source JavaScript library for creating interactive user interfaces, which would tempt any developer or company to use it for frontend development. React’s virtual Document Object Model (DOM) is a standout feature that provides the framework with powerful functionality. It has also gained a considerable share of the mobile market since the release of React Native, a cross-platform mobile development framework.

Without mentioning Angular, any list of the best front-end web development frameworks would be inadequate. It’s a TypeScript-based framework that’s simple and straightforward. Angular is one of the top front-end programming frameworks, developed by Google and released in 2016. It was first launched in 2010 as AngularJs and was later developed to become the popular version, with the goal of overcoming the restrictions of traditional frameworks.

Ember was declared the finest Javascript framework back in 2015. Today, the Ember community is massive and growing, with new features and releases being released on a regular basis. Ember has two-way data binding like Angular, and it comes with many features and components ready to use.

Django is a prominent Python-based framework that has been widely adopted by developers over the last decade. Django is a popular server-side framework that is used by companies such as Google, YouTube, and Instagram. Python syntax guidelines assist programmers to generate clear, clean, and manageable code, allowing them to create highly functional online applications. Because the framework was created by experienced engineers, it’s suitable for developing API features like naive GraphQL integration.

Since 2003, the Spring framework has been an open-source Java platform. Because it is open-source, the developer community can add a variety of add-on projects, improving security, performance, scalability, and efficiency. Many web developers value the fact that it is written in Java, a tightly typed language. However, if you don’t know Java, the learning curve may be rather severe.

It is critical to select a framework that is appropriate for your project. Server-side rendering, speedier development, and SEO, for example, would be your top priorities. This list of the finest frontend and backend web development frameworks, as well as their features, should assist you in selecting the ideal one. Please note that this is not an exhaustive list; we have chosen the ones we believe are the best. There are also other good frameworks available.